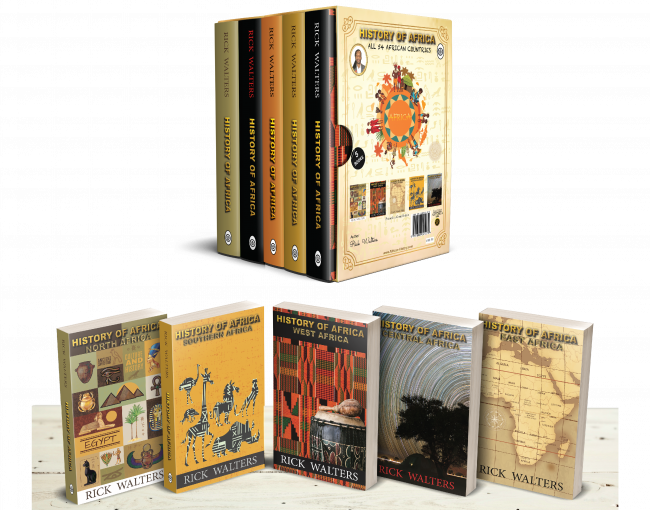 A Total collection of 5x Books, covering all the 54 African countries, in categorical order. Each book represents the 5 different regions in Africa. Which consist of.. (North, West, East, Southern and Central Africa).
The content of this book takes you back from the beginning of time known to human, pre-historic ancient period, Stone Age, Bronze Age, Iron Age among various (Empires & Kingdoms) through to the morden 21st century for each country in chronological order.
This book is solely written for everyone to read regardless of your age, race or religion. GRAB YOUR COPY NOW…

North Africa is a region encompassing the northern portion of the African continent. The Northern part of Africa is made up of 6 countries. They are Algeria, Egypt, Libya, Morocco, Sudan and Tunisia. Northwest Africa has been inhabited by Berbers since the beginning of recorded history, while the eastern part of North Africa has been home to the Egyptians.

The earliest known humans lived in North Africa around 260,000 BCE. The region is located between the Sahara desert and the Mediterranean, along the Atlantic coast and consisting of Morocco, Algeria, Tunisia, Libya and Egypt. The sea travel and the sahara around the region became an equally important area for trade as camel caravans brought goods and people from the south.

GET A COPY… of this book for more details.

Rick Walters is an Author, Ghanaian by birth who relocated to London in his teenage years. He’s the C.E.O of Walters Astoria, a media company based in London, Uk.  He also works in film and fashion industry as a Script writer and a Model.

Having studied history and as a history enthusiast, he was saddened but inspired to write this book having witnessed, then researched and noticed the lack of historical(African History) educational materials in various schools. This educational book sole purpose is to help bridge the gap and teach students about African history.    He believes that, teaching history can help change the world and to eradicate ignorance of the subject matter.